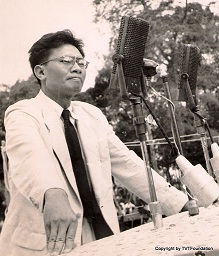 It was the eve of National Day.

Living cost soared sky-high, but restaurants were packed, food was ample. Night-clubs and dance-halls were festive; whiskeys, champagne were flowing...

In the dark unlit countryside, soldiers and innocent peasants continued to fall under the bullets of an internecine war. Yet, laughters resounded in city streets, urban faces showed off their compassionless, “who-cares,“  satiated attitudes...

In the midst of this city brouhaha, I attempted to find a quiet place to rest my tired feet and calm my unsettled mind.

In Dien Hong(2) park, I took seat on a stone bench. Right here in the park and over there in the streets, separated only by a short distance, lived two different worlds.

The graceful branches of a weeping willow tree gently floated in the wind.

A small sampan quietly glided on the dark waters of the river, at the cadence of a mute oar.

Suddenly I was startled by the sensation of a presence nearby. Perhaps, I was day-dreaming and failed to notice it earlier.

I took a glance at the person sitting next to me. He was ageless; neither young, nor old.

One could not tell whether he was Caucasian, Asian or African, for his face looked hard as African ebony, his stature stood strong like a Westerner’s, but his mien was serene as an Asian’s.

His eyes glowed as he struck the conversation with a natural, resonant, clear and distinctive voice:

I rose to my feet to return the greeting. I took another look at the stranger.

His airs, his voice; they were somewhat familiar to me.

Where had I met him before? In Shanghai, Nanking, Guangzhou, Bangkok, Paris, London, Rome, Geneva, Cairo, Tunis???

I was overwhelmed by a profound awe that convinced me he was a man of dignity.

“Pardon me, are you from Saigon or elsewhere?"

“I am not a stranger here, but sure feel like one. A stranger in Saigon, a stranger everywhere, anywhere I went ..."

“Forgive me, but we have a saying:  “All four corners are but one home”; thus, how could you consider yourself a stranger here, especially in these modern times?"

The stranger attempted a smile but could not hide a sarcasm:

“What did you say?  “All four corners are but one home”?

Then why is the human race so divided, why is it warring among itself, why are its people killing one another?  Have you forgotten?  Even in this very land, people are maiming one another for what they called “ideology”!

I have traveled the world over. I have been here for two years now, but then why still feel like a stranger, so lonely, so forlorn...."

“This stranger must have lost his job or experienced a tough time,” thought I.

“May I offer some assistance?  I am not a wealthy man but if you don't mind ..."

The stranger attempted a smile but it immediately died on his lips.

“Thank you, my friend. Not only do I need a person's help, but I also need all mankind's help!  I do not want money. I do not want food. I do not want housing. Yet, I do require everybody's help; spiritual and material help ..."

“How deep your woes must have been!  If you need shelter, I can help find one."

“I have lived in many a hotel, many a castle, many a palace, as well as in many a ghetto, many a hut, many a jail, many a camp. I have crossed many a steppe, many a mountain, many a jungle, many a maquis. Europe, Asia, Africa, the Americas …

Everywhere I went, I was welcome by all. But they only welcomed me in the beginning. No one kept me long enough. That is why I have no home to settle in, no place to build on, and no field to sow my ideal.

I ask not for food. I ask only to be heard. I ask that Reason be heard. I am not hopeless; I am merely disheartened. I am not tired; I need no rest. What I need is a place to start up my work, to create, to lay out a peaceful, prosperous and happy future for all ..."

I listened in silence, musing, “- What a strange person!  He speaks wisdom, yet sounds bizarre!"

The stranger seemed to have read my thought.

“Indeed, I am bizarre. But even bizarre people feel forsaken, because the human heart is but a big vacuum!"

I attempted to invite the stranger home. He replied:

“I have been to your house before. I have visited homes of people like you. I have been there a dozen, a hundred of times. But conversations were just hollow talks, nothing but empty talks!  Why then bother to return?"

I wondered if the stranger was somewhat mentally disturbed. I shivered. Chilly evening?  Fear of being alone with an insane stranger?

Nevertheless, I extended my invitation again. The stranger uttered a laugh of irony:

The stranger's voice turned bitter, and his words roared like ocean waves.

I am here to pull down feudal regimes; to destroy depraved societies; to exterminate neo-colonialism so I can build a new foundation, a just and fair society where all men and women may live in happiness, in spiritual satisfaction and material prosperity.

Everywhere I went, I brought along destruction and death. But my objectives had been neither havoc nor killing. My objectives were to rebuild -- on top of that absolutely required demolition -- a new humane infrastructure for Justice, Democracy and Happiness that was the answer to the wishes of the citizenry, that indigent, under-educated, unprivileged, oppressed and abused masse.

But I was doomed to only destroy, kill, demolish. On that ruin, no one let me erect the house of Justice, plant the tree of Peace, sow the seed of Happiness. The reason for that?  The viciousness of the human heart, its egoism, and ... Vileness and greed thrive on destruction and death!"

The stranger's voice was resolute, but the shimmering tears in his eyes softened the toughness of his weather-beaten face.

We walked in silence toward the exit of the park.

Suddenly, an intense light glowed in the dark beside me. I jolted back, fearing a grenade or plastic explosive. Right next to me a cloud of white smoke rose.

My eyes searched for the stranger. He was not there.

It was no grenade or plastic explosion. Neither was it fireworks commemorating the success of a military coup d’état...

Slowly I strolled on with a heavy heart, filled with regrets and melancholy.

For I too, felt miserable, forsaken. No place to settle in, no field to sow my ideal, no land to build up!  My heart sank in an abyss of sadness.

Like the stranger, I realized that human race recognized only the havoc but had yet to acknowledge the creative and constructive attributes of Revolution.

The stranger's voice still echoed in my ears:

And every afternoon, day after day, I waited tirelessly in Dien Hong park for the strange visitor to return.

"Revolution, where are you?  Are you still around or far gone now?"

(1) In the wake of the communist invasion of South Vietnam in 1975, this collection of short stories A Strange Visitor (Người Khách Lạ) had been labeled "reactionary” by the Hanoi authorities. The public was not allowed to own or read it. It was banned from bookstores and libraries for having "criticized and insulted the great Revolution of the Communist Party. "In a campaign named “Eradication of Depraved Publications” against the so-called "reactionary publications”, communist authorities ordered the destruction of publications by almost 500 South Vietnamese books and writers among which was this short-story collection. However, some original copies of Người Khách Lạ remained safeguarded in libraries at various institutions worldwide and in the USA.

(2) Diên Hồng – The author had chosen to name his fiction park “Diên Hồng” because this name carried a significant meaning in the history of Vietnam. Under the reign of King Trần Nhân Tông, this small land located south of China was under threat of invasion by the mighty Mongolian hordes from the North. Wanting to spare the populace from the havoc by these ferocious invaders, the king confided to Marshal Trần Hưng Đạo his intent to surrender to the enemy. Marshal Trần Hưng Đạo adamantly rejected the idea. He pleaded with the king not to do so, or else to have him – the marshal -- beheaded first if the surrender were to be carried out. He advised the king to hold a referendum on the war. Elders, councilmen, scholars, peasants, women, youngsters, and all others were convened to the royal Diên Hồng Hall for a survey. Unanimously and vehemently, all agreed to fight the enemy to the end. And fought they did. And they victoriously repelled the Mongolian invasion.